Design a site like this with WordPress.com
Get started
Skip to content
tonydssf Just for fun September 16, 2014August 6, 2019 4 Minutes 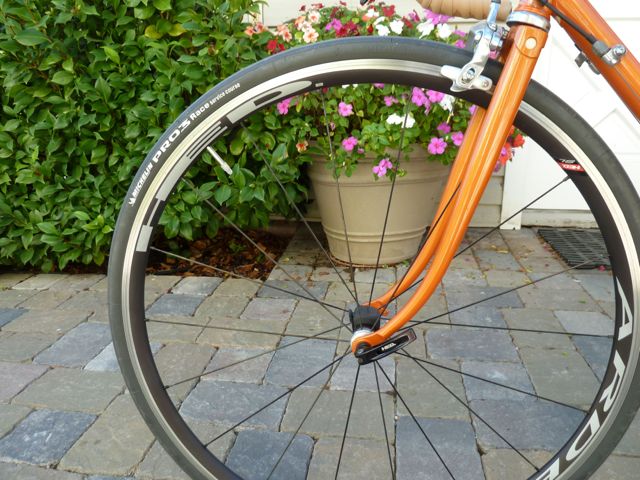 After years of drinking the Kool-Aid that tires should be as thin as possible and pumped to the maximum, we’re finally getting some sane discussion on suitable tires for recreational cyclists. When it came to road tires, thin was in and we liked them hard, rock hard. But we’re now learning that wider tires at lower pressure not only may be more comfortable but that this may actually be faster too. Rims are coming onto the market that are slightly wider than we’ve been used to, increasing the volume of air in the tire, which in turn allows you to lower the pressure without risking a pinch flat.

I’ve been riding a pair of HED Ardennes+ SL wheels for six months and finally feel comfortable making some comments about them. Most clincher rims are 19-20 mm wide but the Ardennes+ rims are 25 mm. In other words they’re extra wide, wider than most road clinchers made today, or at least clinchers intended for speed and nimbleness rather than durability and touring. Wide rims are common in super-cheap wheels intended for neglect and abuse but they’re distinctly rare in racing and performance riding. So, the Ardennes+ manages to be very light: the stated weight is 1502 g. Even if this is exaggerated a bit–and wheel weights almost always are—these are still very light especially for such a fat rim. They certainly feel like it: I can accelerate them easily and they feel very similar to a pair of old Easton SLX 90 wheels, which were purported to weigh about 1420 g. If you’re not sure what your current wheels weigh and like most of us you’re riding a middle-of-the-line Specialized or Trek, your stock wheels are likely to be somewhere around 1700 to 2000 g. So, the Ardennes+ wheels are going to be quite a bit lighter than what you’re used to. For comparison a pair of Mavic Aksium wheels—aluminum rims and steel spokes and considered a relatively inexpensive upgrade from stock wheels—is supposed to weigh 1,735 g. My experience with Mavic rims and wheels is that their weights are always overstated. Nonetheless this gives you an idea how much lighter these HEDs will be than what you’re consider an upgrade wheelset: they’re 230 g lighter than the Aksiums. Well, that’s a half-pound you will feel every time you accelerate. Unfortunately the Ardennes+ wheels are not cheap. Well, almost no wheels are cheap these days but these are less cheap than most other wheels, $1,150 to be exact. (Note: I got a deal on mine so they were quite a bit less. Never pay full price!) Premium wheel prices are going through the roof these days—consider that Mavic’s top-of-the-line aluminum clincher, the R-Sys SLR, costs a mind-blowing $2,200. That’s right, over two grand for, my gawd, wheels with just aluminum rims. Zipp and Enve carbon clincher wheels go for as much as $3,000, and Campy Hyperons are almost, gasp, $4,000! Okay, now that’s just insane. Anyone who’s buying wheels that costly and who isn’t racing is just pulling a Walter Mitty. So, a thousand-plus bucks for a set of light wheels is kind of okay, right?

But as I mentioned, the selling point of these wheels–specifically the rims–is their unusual width rather than their weight. With its Ardennes wheels and Belgium rims, which are both 23 mm wide, HED broke from the narrow-is-better philosophy because their research showed that a wider rim for a standard 23 mm clincher tire smoothed airflow over the wheel by eliminating the ‘light bulb’ shape and replacing it with a smooth transition. The Ardennes+ widens it further to 25 mm. However it was neither for the weight nor the aerodynamics that I was interested in but rather in what the wider rim allows one to do with the tire pressure, which is to lower it quite a bit. In fact, I’ve been riding these wheels at 55-65 psi. That’s a tire pressure more like what you’d find on a cruiser bike than a road bike. Since the rims are slightly wider at 25 mm, I’ve been riding them with 25 mm Michelin Pro 3 tires. This gives an even plusher ride than 23 mm. tires. Michelins are known to run wider than their labeled sizing, and in this case the Pro 3’s measure out to 30 mm after sitting on the rims for a few weeks. That extra half-centimeter makes the ride positively buoyant. For added comfort I’ve put in latex instead of butyl tubes for their resiliency and compliance. And, at this width I could go even lower to around 47-57 psi according to Frank Berto.

If you’re worried that a fatter tire will mean more rolling resistance, never fear: it turns out that this trope isn’t always true either. Wider tires at the same tire pressure deform less, and the amount (and shape) of tire deformation are what determine rolling resistance.

It all works beautifully. Even at 55 psi. I’m in no danger of bottoming out the tires because the air volume is so huge. They have the smoothest ride I’ve ever experienced from a clincher tire, which goes to show that bigger volume tires with lower pressure are a real boon for clinchers as long as you’ve got the right rims. It’s a real pleasure to ride these wheels—they’ve got it all: light weight, super plush ride, precise feel, and they roll fast. You could always stick a wider tire on your existing rims and reduce the tire pressure in order to reap some comfort. But the advantages of a wider rim are the even bigger volume compared to a traditional rim, the increased sidewall support especially for high speed turns, and of course the better aerodynamics if you’re into that kind of thing.