Design a site like this with WordPress.com
Get started
Skip to content
tonydssf Ride rumors April 26, 2016August 6, 2019 2 Minutes 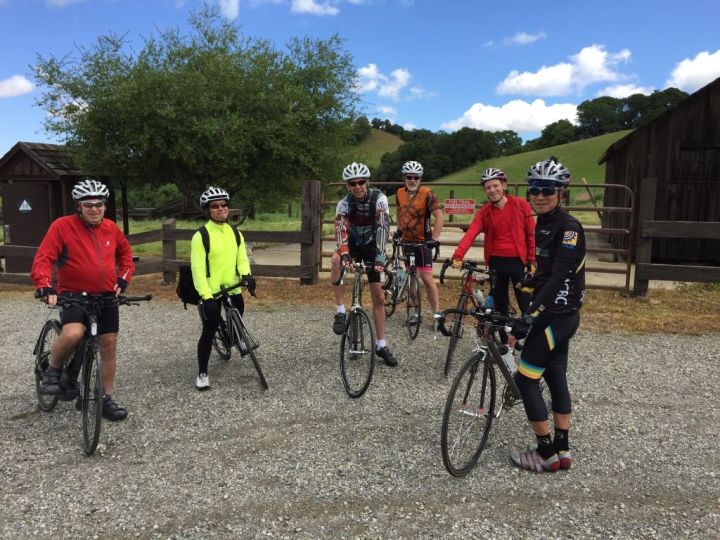 David Gaus had such a good idea to ride Morgan Territory. The backside of Mt. Diablo can be a bitch during the summer when it’s insufferably hot, spring and fall being the best times to have a fun romp on the Rump. A wet winter made the grasslands lush and verdant but time was running out before they would all turn dun-colored. But we hit it when it was still crisply green, with the wind at Morgan Territory Preserve whipping the tall grass like something out of a Terrence Malick film. And, the weather was also picture perfect: sunshine with moderate temps to keep the climbing very pleasant and just a taste of headwind in the afternoon.

David had about 11 or 12 show including several faces I hadn’t seen before. If I remember correctly who was there: Will Bir, Doug O’Neill, Roger Sayre, Jeff Anhalt, Omar Manuar, Roger Hoyer, Jonathan, two more Jeffs, and a woman who showed up late and who didn’t connect with the main group until lunch. True to the ride listing David led it at a B-pace but overall the group must have been frisky because once on Morgan Territory most of the group rolled up the road. We regrouped at Morgan Territory Preserve, shot the bull, inhaled industrial “sports” food, and enjoyed the surreal view with high clouds rolling over the green hills.

The descent to Highland Road was most excellent and I believe Doug said he hit 50. Isn’t that kind of “death wish” territory, Doug? Luckily for me Doug was waiting at Highland because I love to sit on his wheel when he’s fighting the at-times enervating headwind on the way to Danville. Domenico’s was jam-packed leading to a prolonged lunch. Roger and I always eat from the deli side but the line was out the door so we relented and tried the panini/pizza side. Despite not having a wood-fired oven their pizza was a close facsimile of what you might get in Italy (I said close, mind you, not the same as); in other words, it was surprisingly good. Omar ordered a pizza just for himself but then realized if he ate the whole thing he wouldn’t have room for dessert, so he graciously farmed out some of it so he could go back and get some cookies.

After lunch we rolled up Danville Blvd. I committed a bit of a faux pas by leading this section a bit fast and it was more like a D-pace. Mea culpa. But nobody seemed fazed by the rapidity with which we returned to Concord BART. Thanks David!