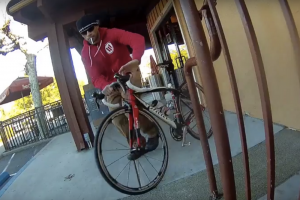 That’s all it takes for your bike to be stolen. This past weekend a Valley Spokesmen member had her expensive Wilier road bike nicked at the Peet’s in Alamo. She had parked it unlocked next to the Peet’s and went inside. When she wasn’t looking—maybe she was in line to order—a thief cased her bike, quickly grabbed it, and threw it into the back of his accomplice’s pickup truck and it was gone. The whole thing took less than ten seconds. Interestingly the entire incident was captured on video, which you can amuse yourself by viewing here. I haven’t heard if the thief has been apprehended, but the license plate number (8X17757) was recovered from the video and that doesn’t bode well for the thieves. Incidently this theft was picked up internationally and put on the front page of Cyclingweekly.co.uk a few days afterwards! You can view that here. [Update: the thief was apprehended later the same day.]

How many of us have done the same? It’s just a dash in to get a latté/card/Big Gulp/drop off a letter. A sad fellow in my town Orinda had his commuter bike stolen from in front of the post office when he went in to check his mailbox. The thief took his bike and left his trasher, which sat in front of the PO with a sign from the victim. Years ago I had a bike stolen when I went in to buy a birthday card. It was locked but not locked to something. But it was front of a Muni stop full of people in Noe Valley. When I stepped back out, it was gone and no one at the bus stop had seen anything! Really? You didn’t see anyone pick up a locked bike and walk away??

On club rides when we stop for a break, we always have at least one person stay back to watch the bikes while the others get lunch or buy snacks. But when you’re by yourself, you’ll have to depend on the kindness of any nearby strangers to watch your bike. Another option is to carry a small cable lock. They’re pretty light—mine is less than a half-pound—and fits easily in a jersey pocket. It won’t stop the thief with a cable cutter but it will deter the kind of thief you saw in the video, providing that you lock your bike to something. Even with a lock it’s important to keep an eye on your bike outside. And leaving a locked bike unattended outside is not a deterrent to a real bike thief; U-locks can be broken in just minutes with the right tools. The only safe bike is the one you’re sitting on.