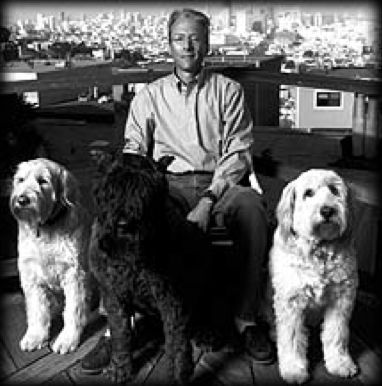 Every March Different Spokes puts on an internal club fundraiser, the Saddle Challenge, to generate some money for Project Inform. Riders pledge to donate a certain amount of money, either a fixed or per mile amount, for the miles they ride during the month. The current Saddle Challenge is actually a mash-up of the Ron Wilmot Ride for Project Inform and the original Saddle Challenge, which started in 2002 and was not a fundraiser at all. It was intended merely to kickstart the riding season by having members log their miles. Trinkets like club caps were awarded to those with the most mileage. The following year the Saddle Challenge morphed into a fundraiser for the Ron Wilmot Bike Ride, which was a completely separate event. The Ron Wilmot Bike Ride was similar to the AIDS Walk: riders did 7.5 mile circuits in Golden Gate Park and pledged money depending on the number of miles they logged.

Who was Ron Wilmot? Currently in Different Spokes I think there are just two of us who had some contact with Ron, Derek Liecty and I, and unfortunately neither of us had more than a passing acquaintance with him. I don’t recall exactly when Ron joined Different Spokes but almost certainly he wasn’t riding regularly with us until the very late Eighties or the early Nineties. This was during “President for Life” Dennis Westler’s reign. I do recall he was a very friendly and warm person and an enthusiastic road cyclist. What also struck me about him was that he was the only person in the club who rode a Merlin titanium bike, an expensive rarity even during Merlin’s heyday. (I suppose that says more about me than him!) In those days although I was still road biking occasionally, I was deep into mountain biking and that may account for why I don’t remember seeing him on many club rides.

Ron was one of the owners/founders of Hartford Properties, which no longer exists. Hartford Properties was a real estate company located where the Chicago Title Co. currently exists on Market Street, not too far from the LGBT Center.

For those too young to remember, the early Nineties was the dark period of AIDS and the epidemic hit our club hard. I wouldn’t go as far as to say the club was decimated but it is true that we lost a large number of longtime members, and of course the AIDS Bike-A-Thon brought us a bigger profile and thus the club roster exploded to almost 400, many of whom were infected. I believe Ron was one of those folks, probably brought into the club because of the AIDS Bike-A-Thon. I’m not sure if Ron was an avid cyclist before the Bike-A-Thon or whether he was converted by us! I recall that Ron was regularly one of the most prolific fundraisers for BAT if not the most prolific. But I’d have to research the old BAT files (and Bay Area Reporters) to verify that. He rode in seven BATs.

It was probably no coincidence that Ron started his ride in 1995: the last AIDS BAT under Different Spokes was in 1994 (the 1995 and final BAT was run by Project Open Hand). The Ron Wilmot Ride for Project Inform shared one particular trait with the Bike-A-Thon: extremely low overhead. BAT prided itself on being able to give 100% of donations to beneficiary organizations (that wasn’t technically true in the last two years of BAT when in order to survive BAT named itself as one of the beneficiaries but even then the amount of money set aside for BAT was a pittance). The RWRFPI was able to hand over about 95% of donations to PI, meaning that overhead was just 5%, which is ridiculously low. In contrast I’ve read that the AIDS Lifecycle has an overhead somewhere between 30-40% (of course ALC also generates much more money overall). Ron was a big supporter of PI, personally raising more than $130,000 for the organization.

The first RWRFPI raised about $17,500 and garnered around 20 riders. So it wasn’t a big, flashy event. But the event lasted 13 years, the last one taking place in 2007. That little event managed to raise over $750,000 for Project Inform! Project Inform awarded him the Champion of Hope award in 1993 for his tireless support of the organization.

Ron died on February 5, 1997 at age 46 but not before he challenged the community to continue the RWRFPI and especially encouraging people with HIV to ride. He personally raised over $104,000 for AIDS causes. Incidentally Ron’s name is in the Circle of Friends in the SF AIDS Memorial Grove—see if you can find it the next time you walk through it.

Both BAT and the RWRFPI are no more. But the spirit of the event continues in the current Saddle Challenge as well as in the Double Bay Double. Perhaps the current lack of interest in the Saddle Challenge is partly due to fading memory. The deadly early days of the epidemic are ancient history for LGBT youth, the epidemic no longer garners headlines, and club members aren’t disappearing suddenly with their obituaries published in the BAR a few weeks later. It’s a different era.

The May/June 1998 ACLU of Northern California newsletter had a nice article about Ron, from which this is quoted: “Ron was HIV-positive for 18 years and devoted much of his energy raising money for AIDS organizations and educating himself and others about AIDS and AIDS treatments. He served on the advisory board of the Jewish Family and Children’s Services AIDS Project and was the first speaker in their ‘Putting a Face to AIDS’ speakers bureau. An avid cyclist who credited bicycling with keeping him asymptomatic for most of the years he was HIV-positive, Ron created a bike-a-thon to benefit Project Inform, an organization that provided him and others with accurate and up-to-date information on AIDS treatments. This lasting legacy that bears his name is held each May[sic]. The afternoon before his first bike-a-thon in 1995, Ron was taken to the emergency room after suffering a severe reaction to an experimental drug. Although he was hospitalized overnight, he nonetheless insisted on being at the bike-a-thon when it began at 10 a.m. Television crews had gathered awaiting the fundraiser’s creator. Ron’s friends got him out of the hospital 20 minutes before the event was to begin, and he appeared at the starting line, dressed in a biking outfit, perched on his bicycle to talk with reporters. [He did the ride too!] Ron’s partner, Jim O’Donnell, explained that Ron believed “Each life is meant to have a purpose, and it’s our responsibility to determine what our purpose is. For Ron, that meant giving back to the community he was part of and making it a better place.””

2 thoughts on “Ron Wilmot and the Saddle Challenge”