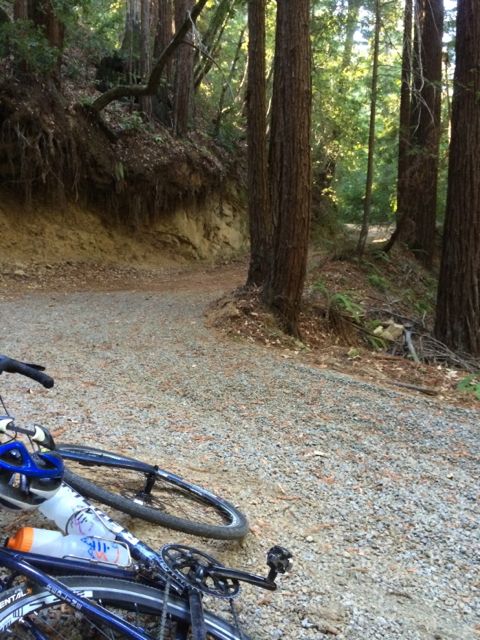 Last weekend I did a club ride starting in Pescadero and out Cloverdale Road into the back side of Big Basin State Park via Gazos Creek Road. After arriving at the park headquarters it continued up car-free Escape Road, a bypass to Highway 236 (Big Basin Way), and onto China Grade and then down Butano Fire Road back to Cloverdale Road and the start. This was a 40-mile, mixed-surface ride–Cloverdale was of course asphalt, Gazos Creek Road was a dirt and gravel fire road, Escape and China Grade were decaying asphalt, and Butano was a dirt fire road. If you can’t find that ride on the DSSF calendar, it’s because the club wasn’t Different Spokes–it was Grizzly Peak Cyclists. There was a time when dirt riding was very popular in Different Spokes but off-road riding has, excuse the pun, fallen by the side of the road. And that’s unfortunate because off-road riding not only can be loads of fun but it’s a relaxing way to escape the ever-present threat of death/injury by car. When I’m riding on the road, there is always an energy-draining vigilance for wayward deathmobiles that makes the ride a little less calming and refreshing as I would like. I know there are a few Spokers out there who mountain bike because I’ve talked to you; if there are others, you are definitely keeping yourselves well hidden. Or, perhaps you just don’t look to DSSF as the right venue to get your dirt yayas? Maybe it’s time for a revival–how about posting a dirt ride on our ride calendar!

Riding a pure road bike such as a Colnago C59 wouldn’t be my first choice for going up Gazos Creek Road, but I did do the entire ride on my old commuter bike, a Redline “cross” bike. I simply swapped out the road tires for some 700×32 Continental Cross tires. The gearing was a little bit tall–the low gear was a 34×26–but I was able to stand and grunt until, well, until I had to get off and walk, which was a few times more than I’m used to because Gazos Creek has some short walls that were definitely greater than 15%. The State Park had also dumped gravel on these sections to stabilize them against erosion and that made them treacherous even when ascending at a measly four miles per hour. But walking is all part of the fun because you’re in the woods next to a trickling stream, no cars in sight, and no urban noise to spoil the experience. Heavenly! The nice thing about a road or ‘cross bike on a ride like this is that it was really a mixed-surface ride, partly on dirt and partly on various qualities of pavement. Having a road bike made the asphalt sections fly by and the bigger tires were perfectly adequate for fire road conditions (well, except the gravel parts). My fellow riders were all on “mountain bikes” (they had front suspension and I didn’t) but two of them were also used as commuters and had un-mountain bike-like tires. In the middle of the ride as we were resting at the top of China Grade at the start of the next dirt section, three young studs on road bikes zoomed past us heading the way we had just come. Drop bars, no discs or cantilever brakes, no triples. Just like Jobst Brandt! (Google that name if you don’t know who he is.) As we dropped down Butano Fire Road I could see their skinny tire tracks in the dirt. They had come up Butano on regular bikes, which goes to show that you can ride off-road on fire roads even with road tires. No big deal.

You don’t necessarily need a mountain bike to ride off-road. There is a hidden trove of dirt roads throughout the Bay Area and there are quite a few “mountain bike” trails that can be ridden with varying degrees of grace on a road or ‘cross bike. Mt. Diablo State Park has a warren of fire roads as does the Santa Cruz Mountains. The East Bay is blessed with the Regional Parks District, which includes Tilden, Redwood, Sibley Volcanic, Black Diamond Mines, and Chabot, all of which have fire roads which are open to cyclists. Nowadays fire roads and double-tracks merely elicits yawns from fat tire afficionados–“Give me single track, the gnarlier the better! Rock gardens? Yeehaw!” You might not be able to clean Eldridge Grade on your road bike but there is still plenty of off-road riding away from cars. Just keep an eye out for those dirt roads you pass all the time on your road bike and never venture to explore!