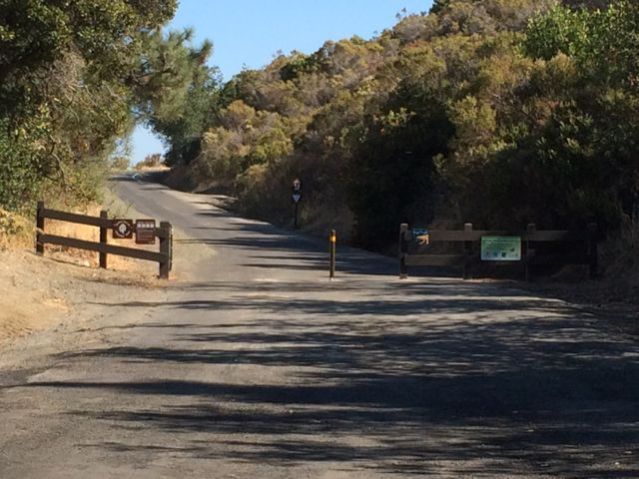 There it is in the photo: the new Carquinez Scenic Trail, beckoning… I shot that photo through the locked gate at the western end of the trail a couple days ago. Carquinez Scenic Drive, the long abandoned county road connecting Crockett and Martinez above the Carquinez Strait, will soon be reopened. It could be open for public use as early as this Friday, Halloween, but no later than Saturday, November 8. The road was closed to car traffic in 1983 and left to decay. But it’s always been open to pedestrians and cyclists willing to hazard the narrow, winding road with broken asphalt and missing sections due to storm runoff. Like a vision out of “Planet of the Apes” it was civilization returning to its original form—large weeds sprouting up between the chunks of road, rusted signs, and a slow, crumbling ambience. A few years ago the East Bay Regional Parks District agreed to assume control of the road and the final stages of resurrection are complete. The road has been rehabilitated, the cliffside stabilized, and striping freshly painted and signs erected. Cars will still be banned and the road is even being incorporated as part of the Bay Trail.

Riding along Carquinez Scenic Drive was one of the popular rides in the early days of Different Spokes when it was called “the Port Costa Loop”. In fact the ride was offered for the first time in March 1983 perhaps because the road had been closed and suddenly was a lot more cycle-friendly.

In a way it’s sad that it’s been “improved”. The road has mostly intact albeit crumbling but it was easy to cycle on a road bike. The sections which had slid away were easy to roll over although one might never know from winter to winter how much of the thin trail would still be intact and the only “damage” would be a little bit of mud on your bike if it were wet. The views along the cliff are nothing short of spectacular on a sunny day and shouldn’t be missed. At least now more people will be able to enjoy them.

On Saturday November 22, assuming the weather is favorable, we’ll roll out from Orinda and take in a big loop through West Contra Costa County and check out the renovated Carquinez Scenic Trail, née Drive. You’ll also be able to ride through historic Crockett, home of C&H Sugar, and go up the back (easy) side of Pig Farm before tackling the Three Bears. Of course, you’re free to check it out yourself beforehand if you can’t wait!