Design a site like this with WordPress.com
Get started
Skip to content
tonydssf Ride rumors August 20, 2018August 5, 2019 2 Minutes 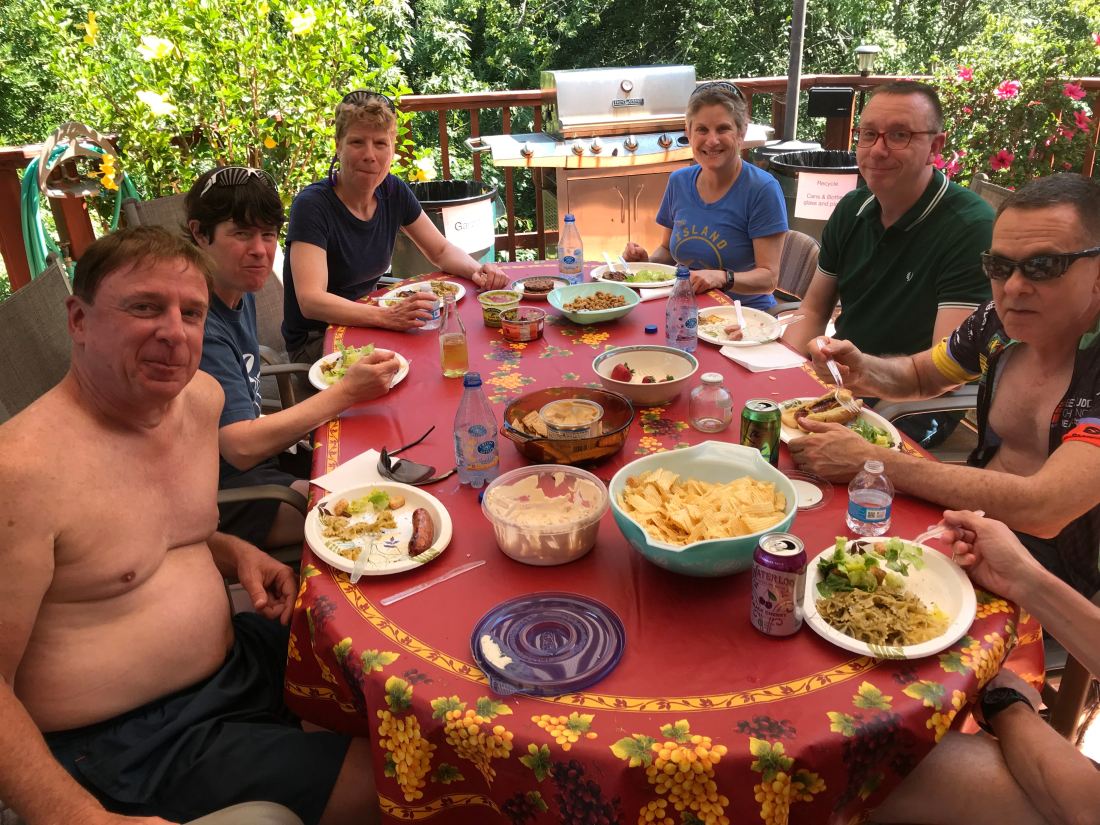 Roger and I—as well as those who participated last year—breathed a sigh of relief when the weather forecasts for the Orinda Pool Party & Ride all came in with moderate temperatures. Last year we endured a sweltering 100+ F day that had the girlie men and manly girls cowering in the shade licking the last drops of water from their bottles; we even took an emergency rest stop at a convenience store to stick our heads in the refrigerated coolers and buy additional cold drinks. In complete contrast this year we had perfect weather from start to stop. Those who came from locales without a real summer gasped in awe at the sunshine and lack of fog we have regularly here in Contra Costa. Some remarked that they saw shadows for the first time in months; others with pale and ghostly complexions finally understood what “sunscreen” was needed for. No need for windbreakers yet no need to break into an unsightly sweat either—it was Goldilocks weather.

Fourteen came to ride and due to the lack of a suitable volunteer to lead the Daddy route, it was summarily cancelled with nary an objection. Those who expressed an interest in proving their girlihood by tackling Daddy were either too intimidated or awed by Daddy’s very big—some would say Huge—climbs and decided that they’d rather have a date with the Twink whose charming good looks were much more appealing than Daddy’s rough demeanor. Pinehurst was beautiful as ever with its towering redwoods providing the illusion that one was riding in Humboldt rather than in the center of the Bay Area. The sun broke out over Oakland and Berkeley as we rode along Skyline and Grizzly Peak Blvd providing beautiful vistas both west and east (well, except for the layer of smoke ominously hanging over Contra Costa). Roger Sayre and David Goldsmith did leader duties and kept everyone safe and in line by cracking their feather boas. Back at the manse Roger and Jim completed final decorations to have the lunch setting suitable for kings and queens. Nine additional folks decided that riding didn’t seem nearly as alluring as reclining on a chaise longue by the pool with a fabulous view of the garden. When the riders arrived almost everyone ended up in the pool for more than a refreshing dip—it looked like actual conversations were happening—and lingering by the pool became the highlight of the day despite the lack of hunky pool boys and girls to entertain by cleaning the pool…slowly.

Those of you who had better roads to ride missed out and you’ll just have to wait until next summer. Maybe there will be a menu refresh too…