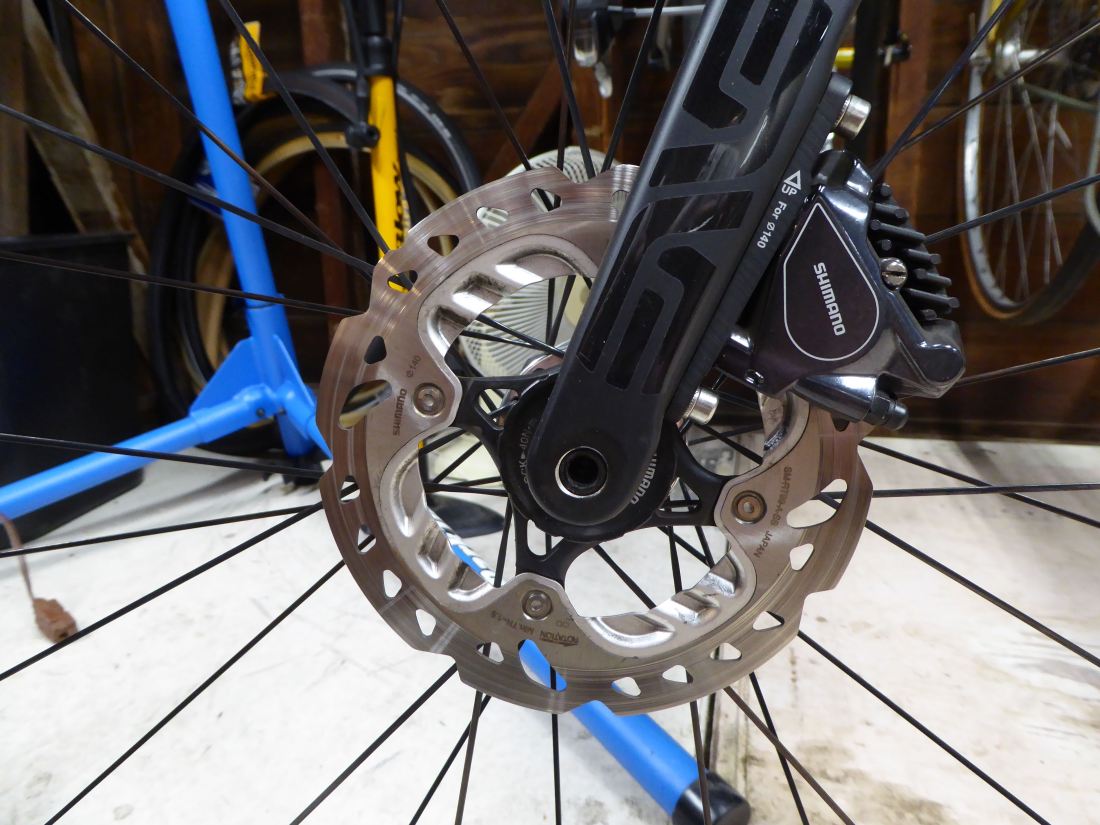 My experience with road disc brakes goes way back to 2003 long before road disc brakes were a thing. I met a Swiss cyclist from Zurich who had a custom Ericksen road bike with disc brakes, which at the time was a real rarity. I disparagingly asked him why he bothered with discs. He said, “It snows in Zurich and I ride year-round.” Oh. Made sense. If you’ve ever tried to brake in snow or sleet, you know how unreliable and scary it can be with rim brakes. Well, actually it’s scary regardless of the brake type but it’s especially scary with rim brakes. As I also commuted to work by bike, the idea was planted. In 2005 I got a cheap road bike that was EOLed by the manufacturer and it had Avid mechanical disc brakes—probably because no one was buying road bikes with disc brakes back then. It was an experiment perhaps motivated by a specific need. I commuted to work by bike rain or shine. My beater commuter bike often was a filthy mess despite having fenders, partly due to rim brakes. The black brake pads shed material and filth; add water and you have a black, oily slime all around your wheels and frame. Since I was carrying my bike up and down BART stairs, I was getting filthy too. I also was hoping that the braking would be more consistent when it rained; I had already gone down once in the rain due to being unable to tell when the rim brakes were going to lock up. Disc brakes do have a reputation for powerful braking but I just needed to have a consistent feel so that I wouldn’t brake too much or too little.

Roger and I had also been riding a tandem with Avid mechanical disc brakes. Due to the increased mass of two riders, with rim brakes you can produce so much heat during long downhills that you can blow the tire right off the rim. That happened to a friend on his single bike on a long, steep downhill in the Alps and we were also aware of a tandem that did blow its tires on a hairy, steep technical descent in Switzerland leading to copious road rash and a trip to the hospital for the duo. I’m a firm believer in disc brakes for tandems when you’re riding in mountainous terrain.

I now have a road bike that has the latest and greatest Shimano hydraulic disc brakes. The brakes are very nice—they stop the bike, require little hand force to produce immense braking whether dry or wet, and have reasonable modulation. There really aren’t any significant downsides purely with respect to braking. But are they that much better than good rim brakes? Well, yes and no. In dry conditions I find that rim brakes, especially Campagnolo brakes, provide really excellent modulation even if they do require more hand force. Shimano and Avid disc brakes modulate well in the middle but as you get near the lock up point the braking curve suddenly goes up. This is really noticeable with metal/sintered brake pads but less so with resin pads.

Then why did I get them? Because I am running big tires. Current Shimano rim brakes top out at about 28mm tires; older generation brakes—and that’s all that I have—can rarely fit around a 28 mm tire and usually top out at 26 mm if you’re lucky––the tires are just too big to fit under the brake arch. That’s partly a frame problem because until recently major bicycle companies thought no one riding a decent road bike was going to use anything bigger than a 25 mm tire. If you ran big tires, then you had to use “long reach” rim brakes, cantilever brakes, or V-brakes. Over the years I’ve used them all and guess what: they work quite well at stopping. So-called long reach side pull brakes actually have really good modulation but they do require more hand force. But they are not uncomfortable on the road to use even for prolonged periods. Cantilevers and V-brakes can stop on a dime just like disc brakes but they use also brake pads and so shed muck and that wouldn’t work for my commute. In an ironic turn Shimano has made their newest rim brakes so powerful that they stop like disc brakes. But I find their modulation is worse than their hydraulic brakes or their older road brakes. They have so much force in a short pull that I’ve had to relearn how to control them.

When reviewers go gaga over hydraulic brakes what are they getting at? Probably the reduction in hand force that to them feels like better modulation. But 99% of the braking you’re going to be doing is exactly what you’ve been doing to date. Do you often think your brakes are underpowered, lack modulation, or just plain suck? For most of us the answer is no. I do think a reasonable case can be made for very heavy bikes such as cargo bikes or e-bikes and very heavy cyclists. Also if you regularly do crazy long and steep downhills or ride in the rain a lot, then disc brakes are extra insurance against blowing a tire or skidding and crashing. But these are not everyday concerns unless you live in the Alps or Dolomites or live in the Pacific Northwest. Even for descending Mt. Diablo or Mt. Umunhum standard road rim brakes are perfectly fine. And how many of you ride your bike regularly in the rain?

Often you’ll see in reviews that the big minus with hydraulic disc brakes (usually no one mentions mechanical disc brakes anymore) is the added weight. The extra weight is probably just under a pound but I don’t think that’s the real problem with disc brakes. What they don’t mention is the extra maintenance that disc brakes incur. If you want to read an in-depth explanation of exactly what maintenance they do require, go here and here.

In my experience disc brakes require frequent and more complex maintenance than rim brakes. Rim brakes are relatively easy to take care of. It’s trivial to replace brake pads, and I usually go years before needing to replace pads despite riding lots of miles. Setting the pads the correct distance from the rim is also a snap. Disc brakes are another matter altogether. Although the pads cost about the same as rim brake pads, they wear through much more quickly and that means you’ll be replacing them often. Resin pads, which are the preferred type, wear very quickly; I’m getting about 2-3,000 miles per brake and having to replace them at least once a year front and rear (note: and I’m light!) The rotors wear out too. With rim brakes you will wear out rims eventually but it’s many years (about 25-40,000 miles in my case). But I’ve discovered that Shimano rotors wear out in about a year of riding. And they’re not cheap, running $60-90 each. Rotors also warp easily. Massive heat from hard, long braking seems to cause rotors to go out of true. You can also accidentally bump the rotor or lean it against something. The distance between the pads and the rotor is so minute, a few millimeters, that minor warpage means the rotor rubs against the pads usually with a grating, annoying squeak. You can true rotors with a rotor tool but I find it’s much harder than truing spokes in a wheel. Finally, replacing a brake cable is super easy for rim brakes. But bleeding a hydraulic line is a tedious process and you’d better have read the instructions carefully for your brakes because there are nuances in how you bleed your brakes depending on the model. At the moment I’m tearing my hair out over inconsistent piston retraction on the front brake. One of the two pistons doesn’t retract quickly after use so I often get a rasping squeak that only goes away when the piston slowly retracts

Of course if you don’t do your own bike maintenance—which seems to be the trend these days—then you escape the hassle. But your shop bills are going to increase instead.

So before you buy that next bike with disc brakes, think: are you ready to trade the convenience and low cost of rim brakes for the complexity, more frequent maintenance, and higher cost? If you’re going to be riding the same old roads, you are gaining weight and cost for what? Road disc brakes do make sense if want to go up to bigger tires, you ride in the wet a lot, or you need to stop a lot of weight. The other application that make more sense to have disc brakes is if you’re riding on fire roads and trails with your road bike: essentially you’re mountain biking on a road bike and the reduced hand force of disc brakes will definitely feel welcome. It’s no surprise that disc brakes are de rigeur for mountain biking. I have an old mountain bike with cantilever brakes and my hands do get tired and crampy. Now, I do like my hydraulic brakes and the extra weight means little to me. But I’m spending more time futzing with them than I did with the worst rim brakes I’ve ever owned. It’s a pain. And rotor rub just becomes a fact of disc brake life—for some it’s easily ignorable but for me it’s a princess-and-the-pea problem: the noise drives me crazy. There is one other advantage to disc brakes: if your wheel goes out of true—whether it’s due to a broken spoke, tacoing the rim, or “just riding along”, you can usually keep riding to get home. With rim brakes you’ll have to do some serious wheel truing by the side of the road/trail or else call a taxi.

One thought on “Disc Brake Hype”